Besarabsky market is a large indoor market situated in the center of Kiev and Bessarabia square, which is located at the Western end of Khreshchatyk, the main and most famous street of the city.

Besarabsky indoor market, called by Kyevans simply "Besarabka", is the central and most expensive market in Kiev. It owes its name to the merchants from Bessarabia (a region on the border of present-day Odessa region and Moldova). According to another version, this area had been called Besarabka before the market appeared (they say that poor people were called "Bessarabians" in Kiev). The idea to improve and modernize the unattractive market place of Bessarabia through building the first indoor market in Kyev, dates back to 1873, but the construction began only in 1910 with the funds provided by the will of a sugar magnate, philanthropist and benefactor L. Brodsky. The project was developed by the architect. G. Guy, who had an experience of designing covered market in Warsaw.

The walls were built of brick, and the ceiling with a glass roof rested on a metal arched frame. The facade of the market is decorated with sculptural compositions "The Peasant with the oxen", "The Milkwoman" as well as the bulls’ heads, fish and fishing nets, flying geese. The basement was equipped with the first underground refrigerating unit. Bessarabian market embodied new European trends, which made efficiency and functionality the cornerstone of building, not the decorative embellishment. It still functions properly according to its purpose.

Here you can find everything: from the most basic products to exotic! You will find the fresh dairy and meat products, various kind of fish, red and black caviar, fruits and vegetables. The abundance of all kinds of flowers. A wide range of different products, and of course a lard is the best of the all world.

How to get to Besarabsky market: the market is located at the end of Khreshchatyk, the nearest metro stations are Khreshchatyk, Maidan Nezalezhnosti, Theatre. 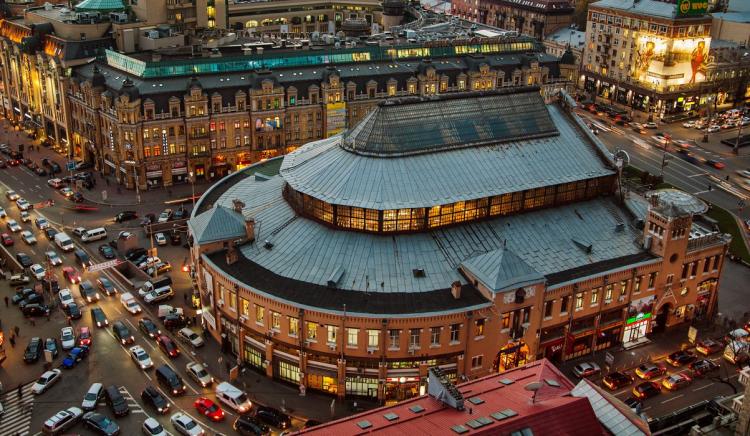