It has a lot to experience. The main religion is the Ukrainian Orthodox Church and you can find a lot of churches, cathedrales and monasteries in Ukraine. In the west the Carpathian Mountains with its untouched nature. In the south Crimea with its mountains, beaches and deep blue sea.

Ukrainian weather is  determined by its geographical position. Ukraine's territory lies in the temperate belt. The climate is temperately continental, and subtropical on the southern coast of the Crimea.

Winter is rather cold in Ukraine. There is much snow in the northern and western parts of the country. There are hot summers and cool winters without heavy snowfalls and frosts.

In spring and autumn the climate is moderate. It is believed that the climate in Ukraine is getting milder each year.

Nevertheless, the history of Ukraine has been giving a hard time to its citizens, many of them are well known all over the world for their great investments into the development of their country and progress.

There are many historical names which each person is familiar with. Among them are: Taras Shevchenko (the most famous writer, painter, fighter for the freedom of Ukrainian people), Lesia Ukrainka (famous writer), Ivan Franko (author, poet, philosopher, scholar, journalist, and political activist), Nickolaj Gogol (great novelist, dramatist and satirist) and many others.

Nowadays there are many people in Ukraine who show their country from the best side in the whole world. Ukrainians are proud of Klichko brothers (boxing champions), Yana Klochkova (a Ukrainian swimmer, who has won five Olympic medals), Liliya Podkopayeva (is the 1996 Olympic all-around champion. She is widely regarded as one of the best gymnasts in history. She is the proud owner of 45 gold, 21 silver and 14 bronze medals). Andriy Shevchenko (football player, played for Dynamo Kyiv and AC Milan), Max Levchin (a co-founder of PayPal. Ukraine-born computer scientist and entrepreneur. Founded Slide, a personal media-sharing service for social networking sites such as MySpace and Facebook.) Bogdan Stupka (actor and the minister of culture of Ukraine) and Ruslana (the winner of the Eurovision Song Contest 2004 with the song ‘Wild Dances’ receiving points from 34 of the 35 countries participating in the contest).

This is, of course a very short list of so many famous Ukrainians.

Ukraine is a special country which is worth visiting. It is takes the biggest territory of the Western Europe. Almost all the territory of Ukraine is covered with black soil which is so valuable for its fertile potential. Thus, almost everywhere in Ukraine people grow a lot of different kinds of vegetables, fruit and cereals.

Ukraine is also rich in minerals, the fields of oil, gas, coal, peat, oil shale, and uranium; iron, manganese, chromium, nickel, titanium, magnesium, and aluminum, copper, zinc, lead are found and developed in Ukraine. Thus, the county has a good system of taking the minerals out of the soil. The big number of plants and factories are situated all over the country. Also the country is famous for its mineral waters which are a good cure for many illnesses. Each year many people from all over the world come to drink this water.

Ukraine is also famous for its hospitality and wonderful cuisine. Whenever you will be invited to visit Ukrainian family, you will be hosted as if you are a part of it. Such Ukrainian national dishes as vareniki, borsch, dranyky and many others will be staying at the dining table. The host will also treat you with the best vodka in the world, which is called Gorilka in Ukraine. 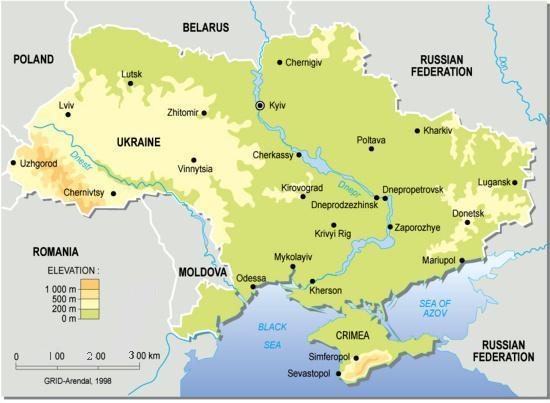