St. Michel’s cathedral is also cold “zlatoverhy” that means “with the roofs of gold”, because it was a unique church in Kiev with a gilt dome in that time.

In 1103 hallows of St. Great martyr Varvara were transferred to Kiev from Constantinople (Tsargrad), and then were passed to St. Michel’s monastery and became its main relic. Before the destruction of the monastery under Soviet rule, the hallows were passed to Vladimirsky cathedral, where they are still situated. Prince Svyatopolk was buried in the erected by him cathedral after his death in April 16, 1114.

In the end of 20 century, there was a grandiose and laborious work for restoration of St. Michel’s cathedral. Historians, artists, sculptors, woodcarvers had to study ancient techniques. Architects, engineers and designers also made their contribution to reconstruction of the historical monument. Restoration of St. Michel’s cathedral was finished in 1998, and official opening was on May, 30th, 1999. In the spring of 2000, central part of St. Michel’s Zlatoverhy cathedral was opened for visitors and divine services, and since the beginning of the year 2001 Varvarinsky and Ekaterina's side-altars were opened too.

There was a unique keyboard-bell instrument– karil’on, established at the belltower of St. Michel’s Zlatoverhy cathedral. A specially trained musician can play the melodies of very different complexity on karil’on.
At the territory adjoining to St. Michel’s cathedral, Kiev seminaries UPTS KP are settled down. 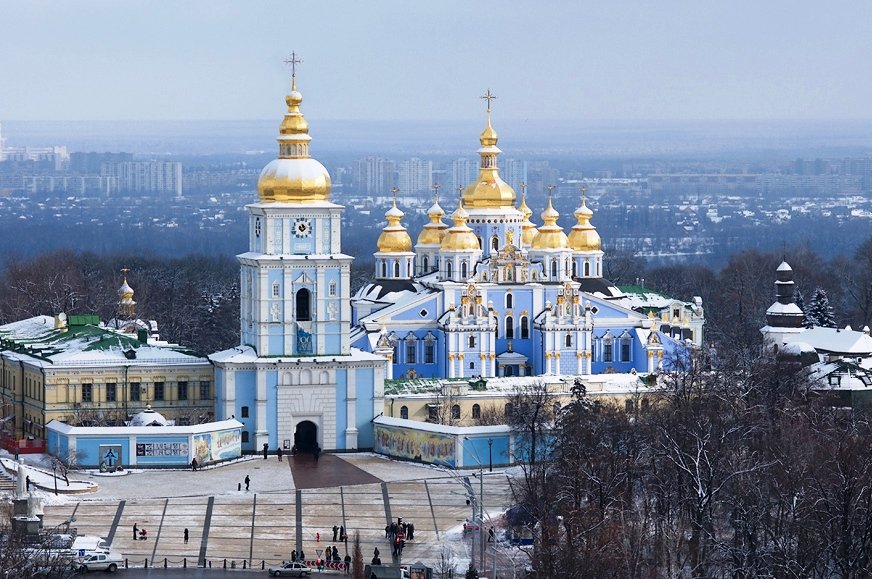